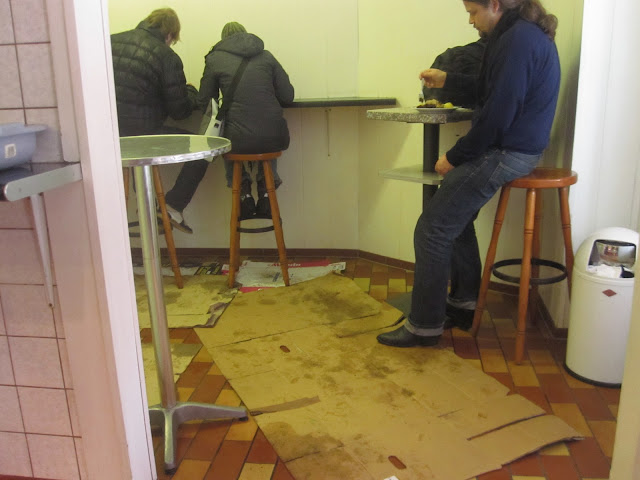 The second I stepped into Fleischerei Domke yesterday afternoon, I knew that it should have been the starting point for my entire project. Fleisherei Domke is not a restaurant, but a butcher shop equipped with a couple of high tables and a metal counter, around which hungry people stand eating schnitzel off mismatched china plates.

For exactly 4 euros, you can get a heaping plate of real German home cooking, like cabbage roulade, goulash with noodles, and my old favorite, dumplings in white sauce. While I was waiting a bunch of people came in alone, ordered, and ate quickly in the corner, as if indulging in a guilty pleasure. I got the sense that each person that entered (all older, and decidedly German), thought of this place as their own secret spot.

I decided that this would be the perfect spot to try blutwurst, aka blood sausage. What better place to order an intimidating meat than at an old school German butcher? This place was obviously the real deal, and I trusted them completely. After I thought about it for a while, I decided I should stop being disturbed by the idea of blood sausage, because I love sausage and salami of all kinds, and I’m sure a lot of them contain some animal parts that I’d rather not know about. Still, something about the idea of eating that much blood worried me, but I ordered it before I could change my mind. 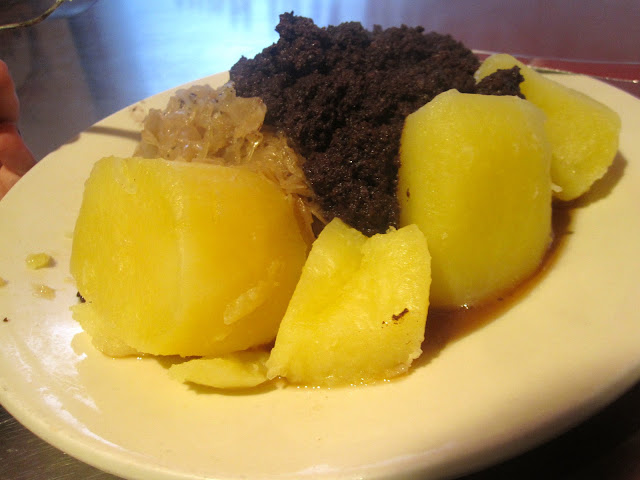 I was surprised when I saw the plate the kindly butcher woman doled out from the vat behind the counter. I had expected a dark red sausage in a casing, but instead got a pile of dark ground sausage atop a steaming mound of sauerkraut and plain boiled potatoes. I sidled up to the counter and dug in, and was pleased to find that the sausage tasted great, and nothing like what I’d imagined. It was very cinnamon-y and peppery, and actually tasted a lot like chorizo. 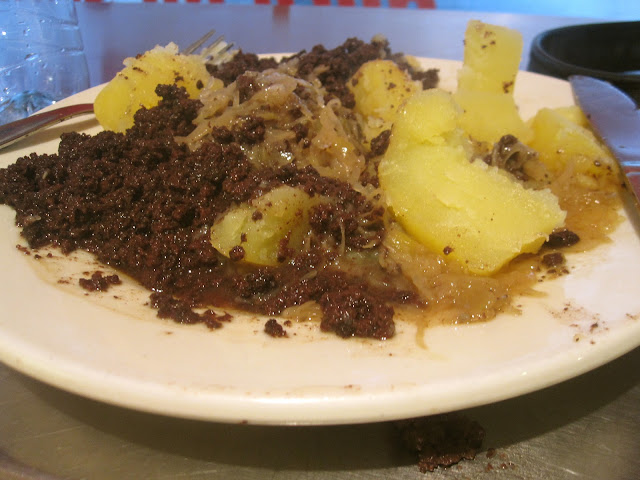 This is the point at which I had to stop. I had been eating for about 20 minutes when bad things began to happen. As much as I ate, it seemed like the meat pile wasn’t getting any smaller. Before long, my taste buds were still saying “yes,” but my arteries were screaming “no.”  I started to have terrible heartburn.  It got so bad that I had to get up immediately and bring my plate to the counter, with my tail between my legs. I couldn’t bear the thought that the German butchers would think I was a wimpy American who couldn’t handle their special sausage, and so I did what any normal person would do: I took it to go and threw it away three blocks later when I was sure no one was looking. And with that, I scurried down the street, clutching my heart, to go eat a salad.